The official homepage of Ohori Park is translated using an external, automated translation service. When using this service, please be aware of possible discrepancies with the original Japanese content of the homepage that may occur with automated translations. Please be sure to refer to the Google Terms of Service.

This area used to be called “Kusagae,” and was a marshland connected to Hakata Bay. When Fukuoka Castle was constructed, the north side was reclaimed and made into a region where feudal warriors resided. The remainder was the outer moat on the west side of the castle, and was referred to as “Ohori.” In 1900, the area became attached to Nishi Park. In 1925, park construction plans were made based on a proposal from people including Tokyo Imperial University Professor Honda Seiroku, who is known for designing Hibiya Park. Landscape gardening was conducted due to the Eastern Industrial Exhibition at Fukuoka in 1927. Ohori Park was then opened in 1929.
The pond at Ohori Park—one of Japan’s most prominent parks with water scenery—is designated as a Registered Monument of Japan. The area includes walking paths and children’s playgrounds. This park is beloved as a place to walk, run, or just relax.

Ukimi Pavilion, which was previously located in the Fur Seal Pond (Fukuoka City Zoological Garden) of Higashi Park, was moved to Ohori Park in 1949.

Ohori Park is home to pine trees at Nakanoshima; willow trees near the pond; and oak, camphor, gingko, holly, magnolia, fig, and other types of plants in the green belt. The flowerbeds bloom with tulips in the spring and sunflowers in the summer. 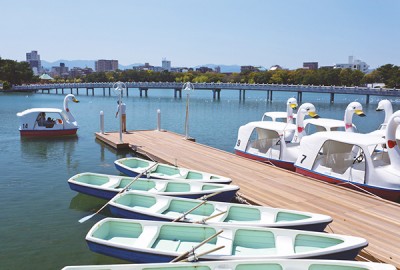 This traditional recreation facility in Ohori Park has been around since 1933. There are swan, and row boats. Enjoy relaxing and traveling the water’s surface while gazing at the pond scenery and wild birds. 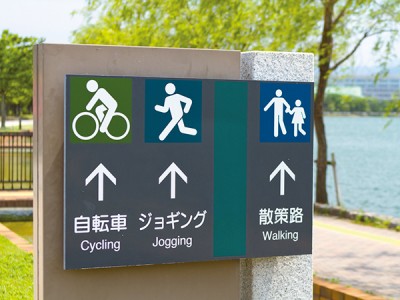 You cannot bring vehicles or motorcycles into the park (excluding permitted vehicles).
For your safety, the paths around the pond are divided (from the interior side) into brick paths for strolling and walking, yellow rubber chip paths for jogging, and asphalt paths for cycling. People on bicycles are asked to give pedestrians the right of way, be prepared to stop immediately, and ride slowly.
Fishing is only permitted in designated areas. Make sure to take home your fishhooks, string, etc.
No fires are permitted in the park.
Please be considerate of other people when using the park. 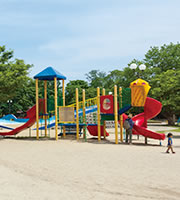 Whale Park is popular for its large slide and dome. There is good visibility, so it’s a perfect place for energetic children to run around. 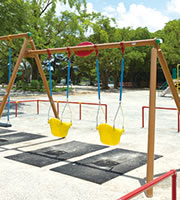 Acorn Park has a wide range of equipment for small children. It is small yet shady, so it’s ideal for families with children.

This garden—a Cultural Property for the residents of the prefecture—was opened in 1984 by Fukuoka Prefecture to commemorate the 50th anniversary of Ohori Park and pass down Japan’s traditional culture to future generations. This garden has a central pond with artificial hills and forests made via traditional methods to express ancient Japanese aesthetics. It has an area of 12,000 square meters. Its main features are the large pond, artificial hills, and nearby pond, and it also has a meandering stream, dry landscape garden, sukiya-zukuri style teahouse, teahouse garden, and more. Visitors can stroll along the paths in the garden, which also has many types of vegetation including pine trees, evergreen oak trees, camphor trees, maple trees, rhododendrons, azaleas, and Japanese andromeda. In this way, visitors can enjoy different scenery in all four seasons.
The Teahouse can be rented out for private cultural events, including tea ceremonies, on a reservation-only basis.

The Ohori Park Noh Theater was built in 1986 to widely promote performances of traditional performing arts such as Noh and Japanese music to prefectural residents; enhance the culture of the prefecture; and pass down, conserve, and share these traditional performing arts with the future. There are 590 seats for audience members. Events are held proactively, including performances of Noh and Kyogen as well as introductory courses and workshops. This facility can be used for a wide range of genres such as shamisen concerts, comedy, and chanson.

Fukuoka Art Museum, located on the south side of Ohori Park, was built in 1979 for permanent exhibitions of modern and ancient works of art. It is one of the largest art museums in Western Japan and features pieces by world-renowned masters such as Dalí, Miró, and Chagall. The collection also includes works by artists from Kyushu as well as tea ceremony implements, Buddhist art, and artworks from the Kuroda Family (the former lords of the Fukuoka Domain), including Important Cultural Properties. 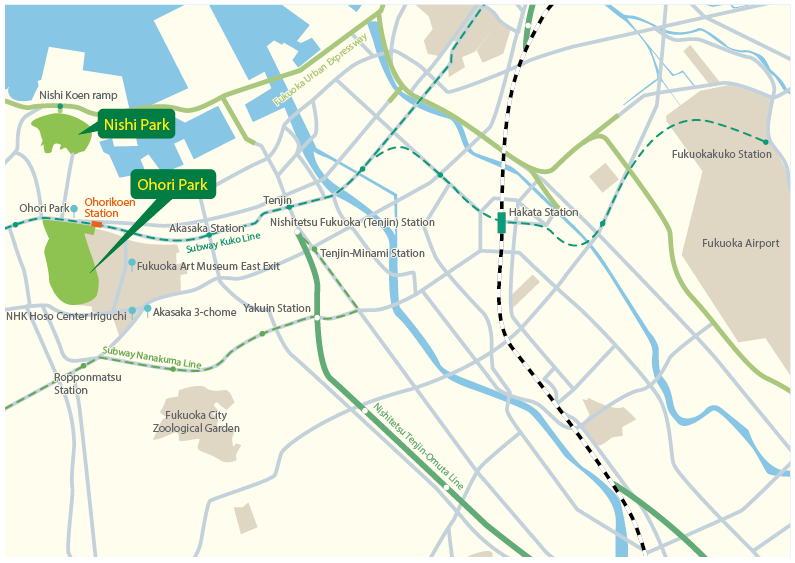